All words in Korean are composed of syllables, which go by the following basic rules: 1. A syllable begins with a consonant. 2. A syllable has at least one consonant and one vowel. 3. Each syllable gets written in a square box.

A syllable that consists of a consonant and a “vertical vowel’ is written with the consonant on the left and the vowel on the right. ㄴ[n] + ㅏ[a] = 나 [na]

A syllable that consists of a consonant and a ‘horizontal vowel’ is written with the consonant on top and the vowel underneath. ㄴ[n] + ㅗ [o] = 노[no]

If a syllable shows a consonant-vowel-consonant combination, in other words, if a syllable ends with a consonant, called batchim (meaning ‘supporting floor’ in Korean), the final consonant goes to the bottom – or floor- of that syllable. 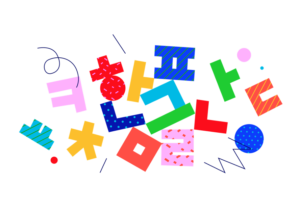 All symbols of Hangeul are written from top to bottom and from left to right. Strokes are never interrupted, not even when they change directions halfway.

Previous Lesson
Back to Course
Next Lesson